Andrew was going to write this blog, because he has been so excited to explore the south of France, but I think if I let him do that, he would write every blog entry… So let me tell you about out little road trip that we took yesterday.

We slept in a little bit in the morning, but once we got up, we (James McLaurin, Andrew and I) took James’ car on a little adventure, starting in Biot. Biot is is super cute little town, just to the north of Nice. They had a market that was starting as we arrived so we took a quick look around. It is a medieval (James’ favourite word) style town, as most towns around here are,and we ran into some people who James knew. We said g’day, exchanged some mildly awkward French and headed off to Saint Paul de Vence.

Andrew had been to Saint Paul de Vence on the trip to Europe he took with his family when he was 16, so was more familiar with the place than even James was. The town was entirely surrounded by walls and on a hill again, not that far from Nice and Antibes. There were some elderly gentlemen playing boules out the front too, which made it feel all the more charming. This is what we wanted to see in France!

After a quick walk around, a few photos and a delicious macaroon each, we decided to drive on. With Drew behind the wheel, James was a little nervous, but he nailed it.

I think we may have missed our planned exit at some point here, but this is where the real fun began! While trying to find somewhere to “chuck a u-ey” we decided to park instead and take a look around the absolutely tiny town we had stumbled upon. Pont de Loup was the name of the village and we spotted some people walking next to the river up a path we didn’t seem to notice at first, so we followed them. The track ran alongside some rapids that were powering a hydro electric scheme. Quite powerful water! After the people we were following stopped to picnic by the water we kept adventuring until the path wound uphill and my little feet could no longer cope (silly me thought we weren’t going to do much walking, so I wore thongs).

Our next stop was on top of the rapids! We inadvertently came across a look out over some cascades a little way up the mountain. After we snuck Andrew and I through the one person gate together to save a euro, we took in the breathtaking waterfall and the drop to the bottom. Beautiful! The boys discussed how they would boldly dive to the bottom if they could before talking some more about medieval roman things again. I may need to say medieval a few more times during this entry so you can understand how many times I heard this word yesterday, you have been warned.

We let our hearts decide where to take us next, and apparently our hearts wanted to go to Courmes. A tiny tiny village 3/4 of the way up the Aples-Maritimes. The road was a little treacherous, and I speculate that James may have been grinding his teeth (I can’t confirm or deny this on his part) but Andrew was great, and we didn’t encounter another car going the other way until the drive back. The town was adorable!! Lush, green and very quiet. It seemed as though they got a few tourists through, mountain bikers in summer and snow fanatics in winter, based on the small number of chalets and the little restaurant on the corner (both of which seemed closed).

The next town our hearts brought us to, was Gréolières. Another tiny village in the Alpes-Maritimes. A quick coffee was all we needed here. There didn’t appear to be much here to keep us for long, but the break was wonderful.

After some more mountain driving, and a couple of roadside stops to take in the view, we rolled into Gourdon. The was the pièce de résistance. We saw this town when we were at the rapids at the bottom of the mountain and wondered how to get there. We could not find this town on google maps as we went, and so it was purely by chance that we arrived here. How blessed we are!! Gourdon is right at the top of the mountain, right on the edge. You can imagine how beautiful this view would be, the sign to the medieval village, surrounded by walls, said “panoramiqué grandiose” and they were not kidding. We unfortunately could not capture all of this breathtaking sight into one photo, and I am afraid that the ones we took don’t quite capture the beauty as I would’ve liked, but I hope the photos below give you an idea.

We were getting tired by this stage, and the sun was beginning to set. So we ventured on to find dinner in Mougines. Andrew and James both had Moules en Frites (mussels and chips), which apparently were delicious, while I had the plat de jour (meal of the day). A lovely meal!

We finished the day in Cannes. We didn’t stay long here, but grabbed some ice-cream and checked out where the film festival will be held next week, before heading home to call our mothers for mothers day (aren’t we lovely?!).

Right now Drew and I are sitting in a park in Aix en Provence after an early train. A picnic lunch and an easy day as we wait to meet Drew’s friend Billy, who he met many moons ago in Newcastle through couch surfing. 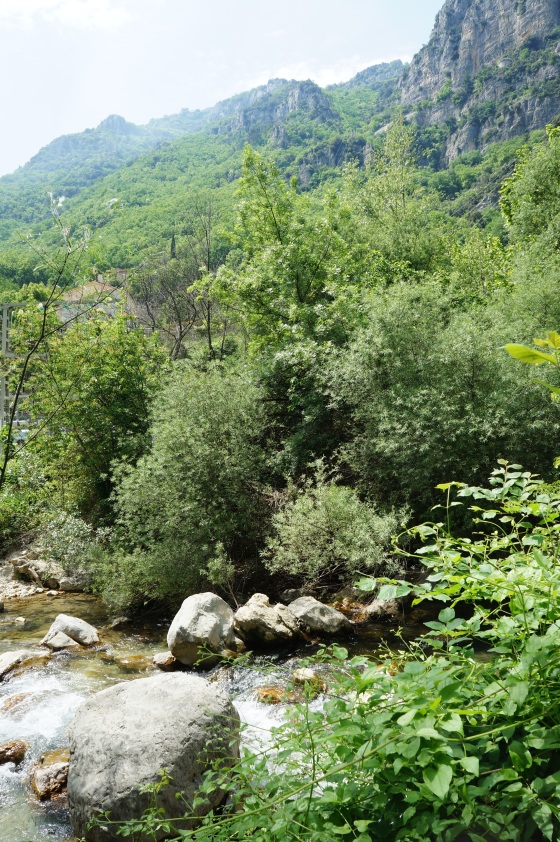