We aren’t quite sure if Edinburgh is our favourite place because it IS the best place on earth, or because it’s the first English speaking country we’ve been to since leaving Australia nearly two months ago.

Scotland is amazing. And I am definitely not playing it up or exaggerating in any way, I can assure you. We may have only been here for 2 days so far, but we have met a few people, and they are all just so lovely!

When we first landed at the airport, it was drizzly, as you’d expect in Scotland, and we had to walk about 20 minutes or so from our bus stop (the buses have free wifi here, by the way. Best. Thing. Ever.), so I guess we were a little worried, given that we couldn’t go down some streets we’d wanted to (no pedestrian access) and some pesky rail lines made it slightly more difficult to navigate. But we made it to or B & B and asked for a recommendation for lunch.

The cafe we went to was amazing! About 100 metres from our place is the best cafe in Edinburgh, Piecebox, where Andrew ordered a flat white. I nearly weed myself with glee! It may not sound like much, but I always order a flat white when I have coffee at home, and after sculling black coffee espresso shots for 2 months, it was like music to my ears. The staff were amazing too! Giving us recommendations on where we should go to eat and what to do. Just what we needed!

We ventured in town after lunch, and by this stage, somehow, by a miracle perhaps, the Scottish sun showed its beautiful face! We walked down through the parks in the city, underneath Edinburgh Castle, the grass and gardens are just beautiful and green, with people sitting everywhere, enjoying the sun (still cool enough for a jumper if you ask me though, which you didn’t, of course, but never mind). We wandered around rather aimlessly, admiring the city, it’s monuments and taking ourselves on whichever turns looked most interesting. Eventually we found ourselves on the Royal Mile or High Street (the streets seem to have two names sometimes, which is a little confusing). The street is bustling with activity, there are street markets, tartan shops a plenty, Celtic jewelry, pubs, churches, you name it! I bought myself a singlet in the markets (though I wish it was a pair of jeans now, I’ve conveniently worn holes into my jeans now and am lacking in the warm clothes department), and we took a tour of one of the Closes.

The closes (yep, Closes, like Anchor Close, a street name), mostly refer to the ones that are now under the rest of Edinburgh. It’s a VERY old city and in the 1600’s, after the plague, it was decided that the Royal Exchange would be built on this area, and the people living in these closes were evicted, and there would’ve been a lot of them, seeing as the buildings were some 7 stories high, built VERY close together and had several families living in most of them. Instead of excavating the area, they just chopped them off at the top and used the remnants of the buildings as foundations for the new buildings, as this was much cheaper. So, underground, we could see the remains of the street as it would’ve looked (largely) in the 1600’s! Very interesting! Unfortunately, we don’t have photos from this tour because we weren’t allowed to take any while under the government building, for obvious reasons, I guess. Sorry about that.

This morning, we took ourselves to church, a real live, English speaking church!! Woo hoooo!! We picked this church, because of a family link of mine. My Nanna had a pen-pal, who also happened to be her step-aunty, who lived in Edinburgh. Nellie Gembles lived here her whole life, and died only 3 years ago at the ripe old age of 107! I suspected that Nellie went to this church after I had googled her name, thinking it would be a nice idea to pay my respects to her in some way. My Nanna spoke highly of her always, even though I think they may have only ever met once in person, when Nanna visited here about 10 years ago. The church was cute, the message was great, and the people were so friendly and kind to us. We had a good chat to some proud old Glasgow Killies, who told us stories of being in the girl guides many moons ago (her husband, equally lovely, claimed she may have been the first girl guide ever because she is so old! Hahaha!), got some advice on what to see, and met the minister, who remembered Nellie Gembles and her speaking of my Nanna in Australia.

After some more wandering, we found ourselves in Grassmarket for a pork, haggis and chilli relish roll. YUM! Andrew jumped at the chance to drink some Irn Bru as well, very Scottish. We snuck inside the walls of Edinburgh Castle for a peak and a photo before skipping over to Calton Hill to see the view over Arthur’s seat and the city (we were advised by the people of the Kirk O’Fields that today wasn’t the day to climb Arthur’s seat because they thought the weather may change and the view would be almost as good from Calton Hill which is easier to escape in the rain). What a beautiful view!

Some more dawdling found us in a tea shop cafe just off George Street (the main street), where I drank white peony tea and ate the best scone with jam and cream I’ve ever had. Drew rushed this experience a little bit because he was super keen to get over to the oldest, and possibly the first, golf course in the world (fair enough).

Bruntsfield Links is a public golf course, which means the council maintains it, and it almost looks like a regular park here, except that walking through it, or sun baking on it, involves an incredibly high risk of being hit with a golf ball, or club. Anyone can play here, there is no dress code and no fences to keep people, or golf balls, in or out. I am more suited to the role of Caddy, so I carried Drew’s bag, advised on weather conditions and handed him an appropriate club on request. He was getting in some lovely hits by the end of it! Maybe he’ll be the next Tiger Woods yet (only with regards to golfing ability, of course). I also took a few celebrity puts now and then, which was lovely! It got darn cold at one point or another though, so we eventually headed back to the Golf Tavern (which is where we hired the clubs) and got ourselves some dinner.

Tomorrow we hit the highlands, so get your kilt on, your bag pipes out, and your woollies on! We’re going north. 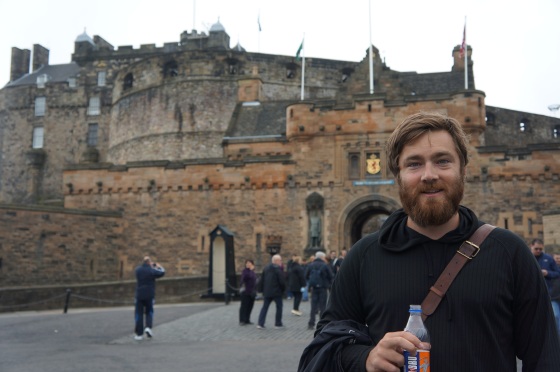 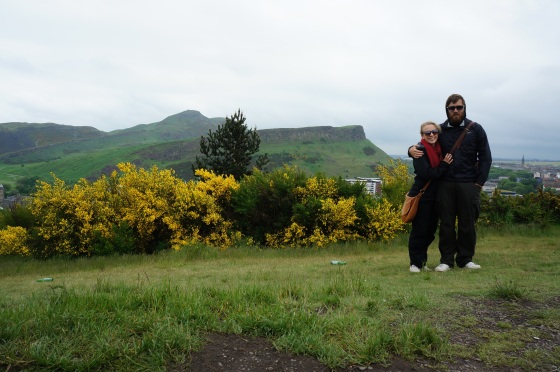